Summer is here… or it has been for the last few weeks, I however haven’t been free as I’ve been working for the university. Now that I do have time however, I’ve decided to take upon myself a new electric vehicle – that is actually usable compared to my skates.

I’ve made lots of trike before, the one on my info page is one I made as a kid nearly 10 years ago now! I’ve also made one with a couple of friends at university for the society ShockSoc. Sadly because this was done using university funding, I wasn’t allowed to use it very much myself and it had to stay on show in the tower building. This lead me to designing and building one myself. Having thought out a few designs (including one which was steered by foot!), weighing up the materials I had/could get and skills I would require – pretty much drilling and bolting; I came up with a design quite like that of an electric wheelchair. Using two driven wheels and some caster wheels, by varying the power to each driven wheel, crude steering can be achieved. As pneumatic caster wheels are reasonable expensive, I went for two driven wheels and a single rear wheel.

Drive system
The most expensive part of this design is by far the hub motors, controllers and batteries. After searching with a keen eye, I managed to pick up some 10″ 36V 350W hub motors on eBay for £46.99 each! It was even more convenient when I found out that my dad’s girlfriend lived near to the shop so I was able to see them in person before purchasing.

For now, I’m using the controllers off my skates as I had them to hand. While they’re only rated for 24V, they still work fine with the motors as undervolting is never really an issue.

One issue however is that I only have a single dimensional throttle meaning I can currently only go forward or backwards. Due to this, I will need to design a small circuit that converts a joystick X, Y into suitable voltages that can control both direction (ratio of voltage between both controllers) and velocity (total peak voltage to controllers).

Hub motors taken from a “hoverboard” – bought from MAF Scooters

The make
The frame was the first part to be made. This consisted of drilling lots of holes and screwing parts together, literally.

From a different angle

Testing out one method of mounting the driven wheels

As can be seen, I was originally going to attach the wheels to a separate piece of steel and then mount that to the frame, I however decided to change my plan to cutting a slot into the frame and using two brackets for each wheel.

Using two “hospital brackets” for each wheel with m5 bolts. This seems to be secure… 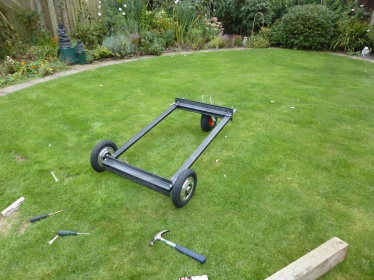 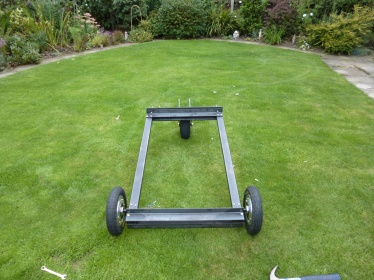 The finished product-ish, all that is needed now is a bar to sit on.

Voila! The final piece now will be designing a controller to convert an XY joystick into ratiometric voltages, suitable for the controllers. I’ll also be using a single battery as two batteries are used in the image above.

Keep tuned for part 2 where I will hopefully have designed and got a useable controller!