To all who haven’t had chance to read part 1 yet, it can be found here.

So! In the previous post, I designed a pretty simplistic graphic analyzer. I’ve since upgraded it to display the frequency range (dependent on the sample rate), along with redesigning the analog input stage. 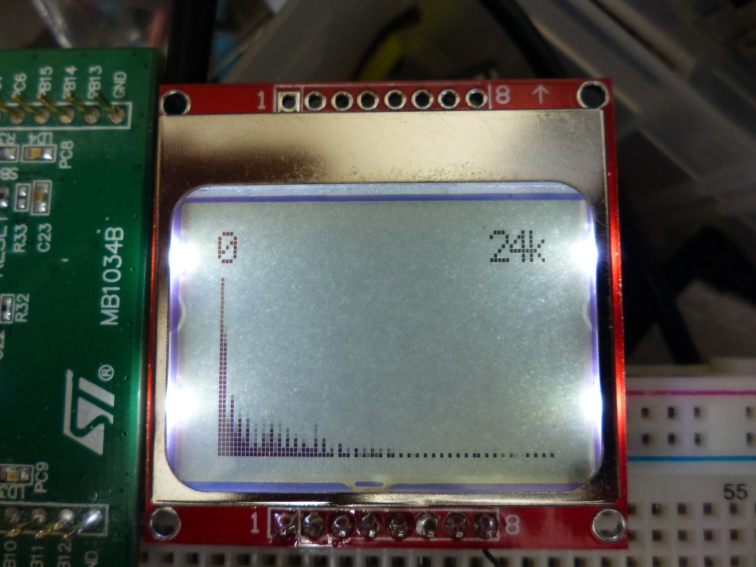 Playing a bit of Dillinger Escape Plan! You can now see what the frequency range is.

As I mentioned in my previous post, the input stage had been pretty poorly designed and was actually causing a bit of aliasing – which was mainly fixed by software oversampling and filtering though this should only be an answer if the processing power is available! I have now fixed this by changing the transistor to a common emitter amplifier, along with adding a 2nd order low pass filter stage.

Input amplifier design:
Designing a transistor amplifier is actually a relatively easy job and a fully functioning inverting transistor amplifier can be realised with 4x resistors, 2x capacitors and obviously, the transistor. There are a variety of biasing methods for transistor amplfiers though the most common (and method that I’ve used) is using a stiff potential divider bias.

So firstly! To design an amplifier, you need to know the specification of that amplifier:

Voila! The transistor amplifier is now designed! To ensure all is good, I generally tend to simulate it in LTspice and look at a few of the circuit parameters.

As can be seen in the above image, the simulated results aren’t actually perfect, unlike in our calculations. The main reason for this is due to all of the approximations that were made e.g. assuming the base emitter voltage will always equal 0.7V. We can however see that there is only a 5.7% error in the collector voltage, a 6.9% error in the base voltage and a 8.2% error in the emitter voltage. All of these are generally negligible and as I’m going to be using different values to the ones originally calculated anyway, its not a massive deal!

With the above values, the error in Vc then increases to 6.6%, the error in Vb increases to 9.3% and finally, the error in Ve actually decreases to 0.3%. As I’ve mentioned previously, these errors will change with components, temperature and other factors so take them with a pinch of salt! For those interested, I’ve now uploaded an excel spreadsheet that can be used to calculate the required resistors to bias a transistor amplifier.

Obviously, for this to fulfil its original purpose, it needs to low pass filter the incoming audio! Realistically, I’ve ripped off the circuit design for a standard second order op amp based low pass filter and changed the active component from an op amp to a transistor. Why have I done this? I don’t have any single package op amps in my electronics box, whereas I have a wealth of resistors and transistors. Not only that, op amps seem the easy way out, I mean who doesn’t like a challenge ;).

Regardless, the rest was somewhat trial and error and consisted of choosing some appropriate values resistors and capacitors to set the low pass filter to roughly Fs/2 (in this case, 24kHz as I’ve upped the sample rate to 48kHz).

The above circuit can also be further improved by adding an additional low pass filter on the output of the transistor amplifier. This adds more attenuation to the higher frequencies compared to a second order filter alone.

Adding an output low pass filter and simulating the two different design styles. The green trace is the improved amplifier, the blue trace is the previous design.

All code updates and the transistor amplifier can be found on my GitHub.

Update 27/6/18
I was asked by a reader to benchmark fix_fft on an STM32F0 and here are the results! I compiled the code using a fixed size array (1024) declared volatile and varied the FFT size and direction (forward or inverse). I compared this to hard coding the array size for compilation and it made little difference for O0, I didn’t try it for O3. 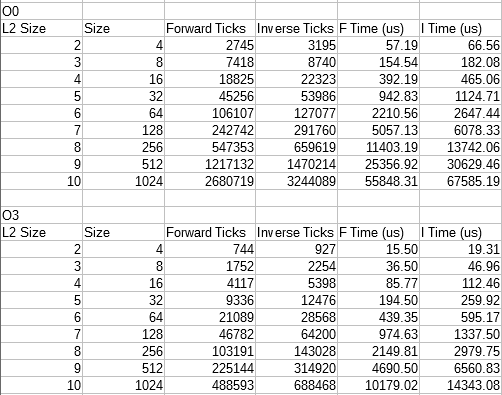 The ticks columns were the direct values of TIM2 which was reset at the start of the FFT and read at the end of the FFT.