To my surprise (as ever… I seem to surprise myself a lot with my timing), I’m coming to the end of making my Skelecs, within my time schedule of getting back to university (Tuesday). I’ve finished all the drilling and my mums partner has my steel and my plans for where to drill the DD shaped holes!

I thought now would be a good time for me to actually commit to learning 3D modelling too. Having never embarked on anything more intricate than a bit of 2D modelling in Inkscape, I wasn’t prepared to throw down a couple of grand on professional CAD package so in my cheapskate as ever ways, I searched the open source CAD market for some nice ol’ free software and came across FreeCAD. Obviously with any form of new software, the initial learning curve seemed ridiculously steep, planes, axis, views, mouse modes?! WHAT! However, after watching a couple of youtube videos (I’d probably count about 30 minutes worth), I was able to go ahead with making my models! As of yet, FreeCAD doesn’t have a dedicated assembly workbench so I made the individual parts to my skates and assembled them as another part. It works for visualisation at least! I wanted to get some properly raytrace’d renders but without knowing much about raytracing OR POV-ray/Luxrender, I’m just going to plant a couple of print screens… 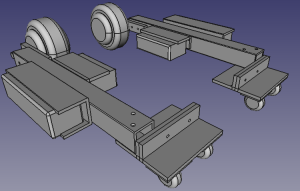 Doing a screenshot from the part editor workbench

This seemed to be how all my renders were turning out… 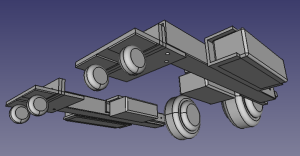 Yup! They are the worst looking castor wheels ever, a plate and a rounded cylinder, perfect!

Progress today (20-9-15)
So today, I’ve been adding my final drills, the mounting for the foot angle plate (to support the heel) and adding the channel to support and protect the batteries.

The holes are meant to be offset on the channel, promise!

As much as this blog might be about electronics, it does seem that these last few posts have been pretty mechanically oriented though I don’t see this as a big deal as this blog should probably be a general “engineering” blog as a whole. I will however still not class myself as good at mechanical engineering and just use it to get the things I want!

In other electronic related news, I’ve made a simple wired handheld controller which I’ll use to test these skates. It consists of a standard 2m 3.5mm audio cable (shielded!), and a 10k linear potentiometer. I’ve made some 3.5mm to futuba connectors to connect to the throttle sockets on the controllers – I don’t know the actual socket types but the futuba servo connectors work just fine. I’m also going to be using a 3.5mm splitter cable to split the potentiometer signal between the two controllers (common grounds, using just one of the 5v rails from the controllers). I hope this doesn’t cause a massive issue by using a single 5v output instead of combining them (I should probably combine them through a pair of diodes but I only bought 3x 3.5mm sockets, doh!

Tomorrow, I’ll be getting the steel back so there should hopefully be a video!

One thought on “Skelecs: Part 5 – Getting there”